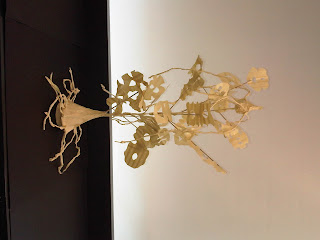 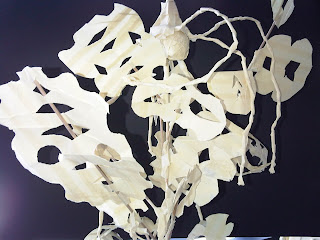 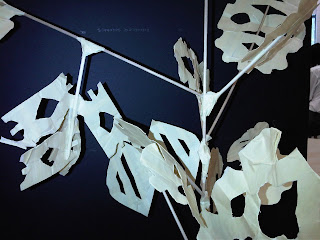 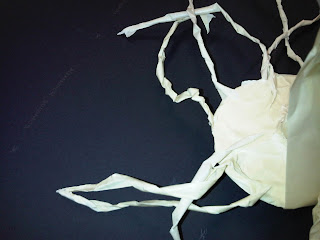 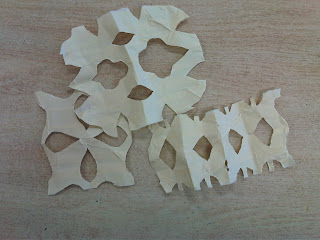 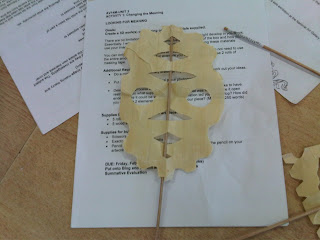 The design of my masking tape sculpture included some preliminary thinking and extremely rough sketches. I had considered using the idea of a spider web and a 3-D patterned piece. In the end I settled for making "snowflakes" and from there I decided to make a tree of masking tape snowflakes. It originally came from another idea that I was going to make a "flower pot" of tape snowflakes.

The restrictions in the project, limited to only tape and wooden sticks, was initially believed to be extremely difficult and almost impossible. I did not think that it would be possible to make a good piece with just a few rolls of plain beige masking tape and a few sticks. However, this did force me to think in a different way, and to approach the project with a different mindset. I decided that as colour wouldn't be used, I would have to create a piece using shape, space, and line; hence the varied snowflake designs. This allowed me to be more innovative with my piece, as it forced me to take more risks in my work. I tried at first to make round shaped snowflakes, but it later evolved into a variety of different shapes, round, edgy, or both. With these varied shapes, I hoped to make a tree with a sense of physical and visual balance which I later achieved with the bottom of a tape roll for stability (but the visual balance was created from placing the snowflakes evenly around the plane). I essentially used all the snowflakes to create repitition in my work which can be seen everywhere, except the top which seemingly exhibits a focal point (a sphere with strands growing out of it).

I had done the project making several snowflake cutouts, which I then held onto for a while, since I was not sure of how to proceed. I considered making a flower pot, but then I chose to create a tree (idea courtesy of Charlie) using the snowflakes as leaves. This was quite an arduous process as tape had always clung to each other, making work and progress slow and sometimes difficult. Later, I had used the wooden sticks to serve as branches, and I turned the tape into coils which I then drizzled around the tree. This gave another dimension to the piece as it also allowed me to make the work appear more full and more interesting.