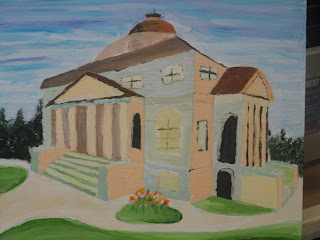 In my perspective painting, I have made a house with renaissance inspired architecture. It is made with acrylic paint.
The overall project was difficult. At first, I had to sketch out the picture using techniques involving vanishing points, horizon lines, and special methods to measure distances (such as pillars). This was relatively difficult at first, however it became easier as the project wore on, starting with boxes to chairs. Sketching my building was tough, as there were two vanishing points, this confused me sometimes on where to point certain lines. The shape of many individual parts of the building were difficult to sketch. Arches were difficult to draw, as the curvature of it never seemed correct for me and the landscape (lawn) was not easy to draw to match the shape of the building (as the vanishing points were moved up).
Painting the picture seemed even more difficult. I had never painted buildings before, and this was totally new to me. The light of the building seemed a little tricky, some areas green-blue, and some a pale orange. To make it more complicated, the light of my sketch was reversed when put onto the canvas, so I had to try to imagine things. Painting the building was quite difficult for me as I have never been able to draw moderately straight lines, and tihs was a critical part of the step. A problem in this involved the openings in the buildings with shadows. They appear to be black from the original picture, however when I applied the black onto the canvas, it showed up very poorly and contrasted the picture too greatly. I tried to adjust by adding some light green and light yellow to the black to make it stand out less.
Something that really helped out was the suggestion given to me to use a larger brush than the tiny one I was using. When I used the tiny brush, it turned out to be to flimsy, not allowing me to draw straight lines, however the thicker brush allowed me to improve this. Also drawing straight lines for me was difficult, and it was suggested that I paint keeping my wrist steady, going up and down to draw a straight line. This helped me a lot to draw straight.

However, I still feel that the painting can still be improved upon on many different areas. First, patience would be much more needed, as I lacked that, forcing me to redo many things over again to maintain a straight line or to stay in boundaries. My sketch was a lot neater than my painting, and painting it was difficult to stay inbetween boundaries as I had used a tiny brush, believing that it would be easier, it turned out to be more difficult.
Posted by Domi- at 5:11 PM