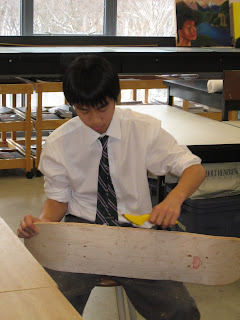 Sanding of the Deck:

The sanding of the deck was time consuming, but nonetheless exciting, knowing that we would have a smooth finish as the fruit of our labour. It was very good to practice using the grating and sanding tools, which may also be a good future use. The first stage in the sanding (using the grating tool) was quite difficult. I found it sometimes tough because the grate would get stuck in the board, or it may pull off ridiculously large pieces of the board. I found it easier to sometimes switch directions, which may sometimes help prevent the tearing off of large pieces. For technique, i found it much easier to use long straight strokes to get more out of the board with minimal effort. Using short strokes got much less out and i found short strokes to be less productive (in the sense that it would not be as smooth). I also sanded out the edges so that the board would be more round, and smoother overall. It seemed easier to hold the board tucked underneath your arms to grate the edges.
The second stage of the sanding process involved the use of sandpaper. I started at the 60, the most rugged, to remove the larger and unecesary parts of the board including chips and glue. Sand paper was an even slower process, however much more rewarding, getting smoother with every increase in sandpaper. I had to start off by removing all the glue and chips in the board. This was the most enduring, having to apply an extra amount of pressure to get rid of it. For the 60, most of the time was spent using my hand and sandpaper only. Using the 60, a lot of time was also spent on the sides. When i moved up to the 80, i applied the sandpaper to a (kindof) styrofoam base to cover more of the flat side of the board. Using this, i mostly went with the grain of the board, feeling much easier to go with, rather than agai 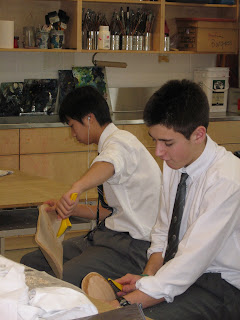 nst it. This was slightly smoother, and took almost as much off as the 60, but a little more refined. I moved slowly up the ranks of sandpaper not finding them all very effective. I didn't really see too much wood bits come up, so it seemed that they did not work. However, feeling the board you could really feel a difference. I could really see a difference when moving up to the 220 and the 400. Both of these produced lots of fine pieces of wood. They made a dramatic difference, taking away all the tiny deficiencies in the wood. The 400 especially, was very good in making the whole board smooth out. By then, the entire board basically felt like a piece of paper. Overall i thought that i was able to make the board very smooth around the edges and the deck.
The Painting:
This process was a moderately dfficult process. The designing of it in pencil was an interesting process where we could draw on a large variety of inspiration, where I finally went with the idea of a guitar. I spent a good deal of time designing the rest of it, adding flames, an octopus, and other objects to the guitar. The next part was harder, where we had to cut out stencils for the skatseboard. This was my least enjoyed part of the project, because the task was tedious, but the final output was well worth it. The designs were applied to paper first. This was fun, as I was able to experiment with different tones and colours. I was able to try many new designs and eventually get a few designs I liked from the 3 different paintings I did. From this, I also developed a few more stencil designs, including the peace symbol, curve-design, and squares.
Then it was time to make a final. I put all my favourite designs together, and applied it to another sheet of paper. This included a blue-white background, the V-shaped guitar(black and white), orange peace symbols, flames, and had nearly perfected the technique by using the sponge.
After completing the paper copy. I moved onto the real skateboard. I had designed the whole thing with extreme caution, making sure that I did not screw up on the final - after so many trials. I had done everything, but left out the detailed designs such as the flames, octopus, and waves. I felt that the plain black and white guitar (with a brown neck) looked better without the designs. I felt that I had complicated some things with all the extra designs and it did not look as good. Keeping it simple made the guitar turn out better and have the middle stand out.
Posted by Domi- at 5:52 PM