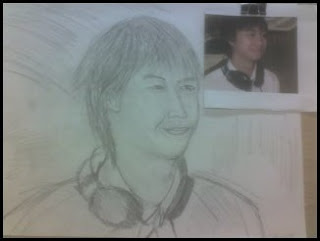 For our self portrait of ourselves, I found this to be a very interesting project. I had never really sketched out a picture of myself, or done much sketching in the recent past so it was very exciting.
I had practiced a lot of facial features before attempting the final project. Included in them were the eyes, lips, ears, nose, and muscle drawings. I also practiced proportions of the head with the egg-shaped structure and practiced shading. I found the eyes, muscles, and shading the easier parts of the project. I found the lips and shape of the head to be harder objects to draw. When attempting these drawings, I had used light pencils such as H or Hb to create the basic shape and then I had used darker pencils like 3b's or 4b's to shade it in and darken the picture.

All of this was incorporated into the final piece of the project, a self portrait of ourselves. We had looked at ourselves in the mirror and sketched out ourselves, sometimes being timed - this new approach to practice our proportions was really fun, but it helped me properly define certain proportions of knowing where the eyes, ears, lips, and nose where positioned on the head.

Putting everything into the final piece, we took a picture of ourselves and sketched out the picture. What I had found was that putting all the pieces together was much more difficult than drawing individual sections or parts of the face. Especially drawing myself, from a picture (I never like the outcomes of photos of myself), it seemed much more complex than what we had done before. I had proportions of the face quite distorted in comparison of what I really looked like. I had made a lot of changes before I was able to make things look more in proportion and shaped correctly. I had initially drawn up the circular shape, then added an oval shape to the bottom. However, this was in a 3/4 turned position and the shape was a little off from what it looked like, and it took me a long time to have that figured out. I initially had drawn the eyes, nose, ears, and mouth in once the shape was drawn, but they too were out of proportion. For this project, I had done plenty of erasing and drawing and erasing again. Probably one of the hardest things I've done in art! It took a very long time of trial and error, with help from friends and Ms. Cockburn to actually get the proportions and shape correct.
For shading the picture, I had found this easier than my other parts of the project, I was able to spot dark areas and light areas and actually mirror it on the picture (I thought). I had done shading, then I used my finger to smudge it to blend it better, then I used the kneaded eraser to take parts of unwanted areas out. The kneaded eraser was very important in my shading, as it helped to gradually take pieces of the darker areas out.
Overall, this was a fun, but very difficult project.
Posted by Domi- at 8:27 AM